“Send for the police.”

“I probably shall. But not just yet. Would you glance carefully out of the window, Watson, and see if anyone is hanging about in the street?”

Watson looked warily round the edge of the curtain.

“Yes, there is one rough fellow near the door.”

“That will be Sam Merton–the faithful but rather fatuous Sam. Where is this gentleman, Billy?”

“In the waiting-room, sir.”

Watson waited until the door was closed, and then he turned earnestly to his companion.

“Look here, Holmes, this is simply impossible. This is a desperate man, who sticks at nothing. He may have come to murder you.”

“I should not be surprised.”

“I insist upon staying with you.”

“You would be horribly in the way.”

“Well, I can’t possibly leave you.”

“Yes, you can, Watson. And you will, for you have never failed to play the game. I am sure you will play it to the end. This man has come for his own purpose, but he may stay for mine.”

Holmes took out his notebook and scribbled a few lines. “Take a cab to Scotland Yard and give this to Youghal of the C. I. D. Come back with the police. The fellow’s arrest will follow.”

“Before you return I may have just time enough to find out where the stone is.” He touched the bell. “I think we will go out through the bedroom. This second exit is exceedingly useful. I rather want to see my shark without his seeing me, and I have, as you will remember, my own way of doing it.”

It was, therefore, an empty room into which Billy, a minute later, ushered Count Sylvius. The famous game-shot, sportsman, and man-about-town was a big, swarthy fellow, with a formidable dark moustache shading a cruel, thin-lipped mouth, and surmounted by a long, curved nose like the beak of an eagle. He was well dressed, but his brilliant necktie, shining pin, and glittering rings were flamboyant in their effect. As the door closed behind him he looked round him with fierce, startled eyes, like one who suspects a trap at every turn. Then he gave a violent start as he saw the impassive head and the collar of the dressing-gown which projected above the armchair in the window. At first his expression was one of pure amazement. Then the light of a horrible hope gleamed in his dark, murderous eyes. He took one more glance round to see that there were no witnesses, and then, on tiptoe, his thick stick half raised, he approached the silent figure. He was crouching for his final spring and blow when a cool, sardonic voice greeted him from the open bedroom door: 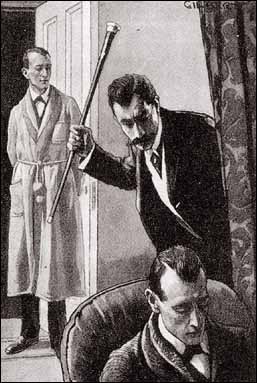 The assassin staggered back, amazement in his convulsed face. For an instant he half raised his loaded cane once more, as if he would turn his violence from the effigy to the original; but there was something in that steady gray eye and mocking smile which caused his hand to sink to his side.

“It’s a pretty little thing,” said Holmes, advancing towards the image. “Tavernier, the French modeller, made it. He is as good at waxworks as your friend Straubenzee is at air-guns.”

“Put your hat and stick on the side-table. Thank you! Pray take a seat. Would you care to put your revolver out also? Oh, very good, if you prefer to sit upon it. Your visit is really most opportune, for I wanted badly to have a few minutes’ chat with you.”