” ‘Well, you certainly touched upon rather a tender point. Might I ask how you know, and how much you know?’ He spoke now in a half-jesting fashion, but a look of terror still lurked at the back of his eyes.

” ‘It is simplicity itself,’ said I. ‘When you bared your arm to draw that fish into the boat I saw that J. A. had been tattooed in the bend of the elbow. The letters were still legible, but it was perfectly clear from their blurred appearance, and from the staining of the skin round them, that efforts had been made to obliterate them. It was obvious, then, that those initials had once been very familiar to you, and that you had afterwards wished to forget them.’

” ‘What an eye you have!’ he cried with a sigh of relief. ‘It is just as you say. But we won’t talk of it. Of all ghosts the ghosts of our old loves are the worst. Come into the billiard-room and have a quiet cigar.’

“From that day, amid all his cordiality, there was always a touch of suspicion in Mr. Trevor’s manner towards me. Even his son remarked it. ‘You’ve given the governor such a turn,’ said he, ‘that he’ll never be sure again of what you know and what you don’t know.’ He did not mean to show it, I am sure, but it was so strongly in his mind that it peeped out at every action. At last I became so convinced that I was causing him uneasiness that I drew my visit to a close. On the very day, however, before I left, an incident occurred which proved in the sequel to be of importance.

“We were sitting out upon the lawn on garden chairs, the three of us, basking in the sun and admiring the view across the Broads, when a maid came out to say that there was a man at the door who wanted to see Mr. Trevor.

” ‘He says that you know him, and that he only wants a moment’s conversation.’

” ‘Show him round here.’ An instant afterwards there appeared a little wizened fellow with a cringing manner and a shambling style of walking. He wore an open jacket, with a splotch of tar on the sleeve, a red-and-black check shirt, dungaree trousers, and heavy boots badly worn. His face was thin and brown and crafty, with a perpetual smile upon it, which showed an irregular line of yellow teeth, and his crinkled hands were half closed in a way that is distinctive of sailors. As he came slouching across the lawn I heard Mr. Trevor make a sort of hiccoughing noise in his throat, and, jumping out of his chair, he ran into the house. He was back in a moment, and I smelt a strong reek of brandy as he passed me.

“The sailor stood looking at him with puckered eyes, and with the same loose-lipped smile upon his face.

” ‘Why, dear me, it is surely Hudson,’ said Mr. Trevor in a tone of surprise.

” ‘Hudson it is, sir,’ said the seaman. ‘Why, it’s thirty year and more since I saw you last. Here you are in your house, and me still picking my salt meat out of the harness cask.’

” ‘Tut, you will find that I have not forgotten old times,’ cried Mr. Trevor, and, walking towards the sailor, he said something in a low voice. ‘Go into the kitchen,’ he continued out loud, ‘and you will get food and drink. I have no doubt that I shall find you a situation.’

” ‘Thank you, sir,’ said the seaman, touching his forelock. ‘I’m just off a two-yearer in an eight-knot tramp, short-handed at that, and I wants a rest. I thought I’d get it either with Mr. Beddoes or with you.’

” ‘Bless you, sir, I know where all my old friends are,’ said the fellow with a sinister smile, and he slouched off after the maid to the kitchen. Mr. Trevor mumbled something to us about having been shipmate with the man when he was going back to the diggings, and then, leaving us on the lawn, he went indoors. An hour later, when we entered the house, we found him stretched dead drunk upon the dining-room sofa. The whole incident left a most ugly impression upon my mind, and I was not sorry next day to leave Donnithorpe behind me, for I felt that my presence must be a source of embarrassment to my friend.

“All this occurred during the first month of the long vacation. I went up to my London rooms, where I spent seven weeks working out a few experiments in organic chemistry. One day, however, when the autumn was far advanced and the vacation drawing to a close, I received a telegram from my friend imploring me to return to Donnithorpe, and saying that he was in great need of my advice and assistance. Of course I dropped everything and set out for the North once more.

“He met me with the dog-cart at the station, and I saw at a glance that the last two months had been very trying ones for him. He had grown thin and careworn, and had lost the loud, cheery manner for which he had been remarkable.

” ‘The governor is dying,’ were the first words he said.

” ‘Apoplexy. Nervous shock. He’s been on the verge all day. I doubt if we shall find him alive.’

“I was, as you may think, Watson, horrified at this unexpected news.

” ‘Ah, that is the point. Jump in and we can talk it over while we drive. You remember that fellow who came upon the evening before you left us?’

” ‘Do you know who it was that we let into the house that day?’

“I stared at him in astonishment.

” ‘Yes, it was the devil himself. We have not had a peaceful hour since — not one. The governor has never held up his head from that evening, and now the life has been crushed out of him and his heart broken, all through this accursed Hudson.’

” ‘Ah, that is what I would give so much to know. The kindly, charitable good old governor — how could he have fallen into the clutches of such a ruffian! But I am so glad that you have come, Holmes. I trust very much to your judgment and discretion, and I know that you will advise me for the best.’

“We were dashing along the smooth white country road, with the long stretch of the Broads in front of us glimmering in the red light of the setting sun. From a grove upon our left I could already see the high chimneys and the flagstaff which marked the squire’s dwelling.

” ‘My father made the fellow gardener,’- said my companion, ‘and then, as that did not satisfy him, he was promoted to be butler. The house seemed to be at his mercy, and he wandered about and did what he chose in it. The maids complained of his drunken habits and his vile language. The dad raised their wages all round to recompense them for the annoyance. The fellow would take the boat and my father’s best gun and treat himself to little shooting trips. And all this with such a sneering, leering, insolent face that I would have knocked him down twenty times over if he had been a man of my own age. I tell you, Holmes, I have had to keep a tight hold upon myself all this time and now I am asking myself whether, if I had let myself go a little more, I might not have been a wiser man.

” ‘Well, matters went from bad to worse with us, and this animal Hudson became more and more intrusive, until at last, on his making some insolent reply to my father in my presence one day, I took him by the shoulders and turned him out of the room. He slunk away with a livid face and two venomous eyes which uttered more threats than his tongue could do. I don’t know what passed between the poor dad and him after that, but the dad came to me next day and asked me whether I would mind apologizing to Hudson. I refused, as you can imagine, and asked my father how he could allow such a wretch to take such liberties with himself and his household.

” ‘ “Ah, my boy,” said he, “it is all very well to talk, but you don’t know how I am placed. But you shall know, Victor. I’ll see that you shall know, come what may. You wouldn’t believe harm of your poor old father, would you, lad?” He was very much moved and shut himself up in the study all day, where I could see through the window that he was writing busily.

” ‘That evening there came what seemed to me to be a grand release, for Hudson told us that he was going to leave us. He walked into the dining-room as we sat after dinner and announced his intention in the thick voice of a half-drunken man.

” ‘ “You’re not going away in an unkind spirit, Hudson, I hope,” said my father with a tameness which made my blood boil. 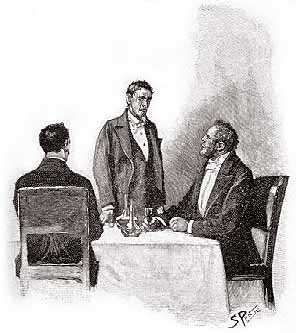 ” ‘ “Victor, you will acknowledge that you have used this worthy fellow rather roughly,” said the dad, turning to me.

” ‘ “On the contrary, I think that we have both shown extraordinary patience towards him,” I answered.

” ‘He slouched out of the room and half an hour afterwards left the house, leaving my father in a state of pitiable nervousness. Night after night I heard him pacing his room, and it was just as he was recovering his confidence that the blow did at last fall.’