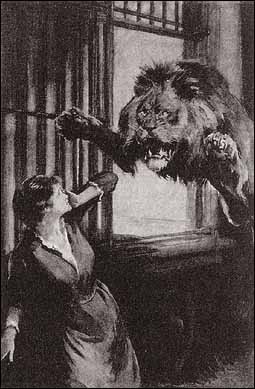 “That is Leonardo,” she said.

“The same. And this–this is my husband.”

It was a dreadful face–a human pig, or rather a human wild boar, for it was formidable in its bestiality. One could imagine that vile mouth champing and foaming in its rage, and one could conceive those small, vicious eyes darting pure malignancy as they looked forth upon the world. Ruffian, bully, beast–it was all written on that heavy-jowled face.

“Those two pictures will help you, gentlemen, to understand the story. I was a poor circus girl brought up on the sawdust, and doing springs through the hoop before I was ten. When I became a woman this man loved me, if such lust as his can be called love, and in an evil moment I became his wife. From that day I was in hell, and he the devil who tormented me. There was no one in the show who did not know of his treatment. He deserted me for others. He tied me down and lashed me with his ridingwhip when I complained. They all pitied me and they all loathed him, but what could they do? They feared him, one and all. For he was terrible at all times, and murderous when he was drunk. Again and again he was had up for assault, and for cruelty to the beasts, but he had plenty of money and the fines were nothing to him. The best men all left us, and the show began to go downhill. It was only Leonardo and I who kept it up–with little Jimmy Griggs, the clown. Poor devil, he had not much to be funny about, but he did what he could to hold things together.

“Then Leonardo came more and more into my life. You see what he was like. I know now the poor spirit that was hidden in that splendid body, but compared to my husband he seemed like the angel Gabriel. He pitied me and helped me, till at last our intimacy turned to love–deep, deep, passionate love, such love as I had dreamed of but never hoped to feel. My husband suspected it, but I think that he was a coward as well as a bully, and that Leonardo was the one man that he was afraid of. He took revenge in his own way by torturing me more than ever. One night my cries brought Leonardo to the door of our van. We were near tragedy that night, and soon my lover and I understood that it could not be avoided. My husband was not fit to live. We planned that he should die.

“Leonardo had a clever, scheming brain. It was he who planned it. I do not say that to blame him, for I was ready to go with him every inch of the way. But I should never have had the wit to think of such a plan. We made a club–Leonardo made it–and in the leaden head he fastened five long steel nails, the points outward, with just such a spread as the lion’s paw. This was to give my husband his death-blow, and yet to leave the evidence that it was the lion which we would loose who had done the deed.

“It was a pitch-dark night when my husband and I went down, as was our custom, to feed the beast. We carried with us the raw meat in a zinc pail. Leonardo was waiting at the corner of the big van which we should have to pass before we reached the cage. He was too slow, and we walked past him before he could strike, but he followed us on tiptoe and I heard the crash as the club smashed my husband’s skull. My heart leaped with joy at the sound. I sprang forward, and I undid the catch which held the door of the great lion’s cage.

“AS I SLIPPED THE BARS IT BOUNDED OUT, AND WAS ON ME IN AN INSTANT.”

“And then the terrible thing happened. You may have heard how quick these creatures are to scent human blood, and how it excites them. Some strange instinct had told the creature in one instant that a human being had been slain. As I slipped the bars it bounded out and was on me in an instant. Leonardo could have saved me. If he had rushed forward and struck the beast with his club he might have cowed it. But the man lost his nerve. I heard him shout in his terror, and then I saw him turn and fly. At the same instant the teeth of the lion met in my face. Its hot, filthy breath had already poisoned me and I was hardly conscious of pain. With the palms of my hands I tried to push the great steaming, blood-stained jaws away from me, and I screamed for help. I was conscious that the camp was stirring, and then dimly I remembered a group of men. Leonardo, Griggs, and others, dragging me from under the creature’s paws. That was my last memory, Mr. Holmes, for many a weary month. When I came to myself and saw myself in the mirror, I cursed that lion–oh, how I cursed him!–not because he had torn away my beauty but because he had not torn away my life. I had but one desire, Mr. Holmes, and I had enough money to gratify it. It was that I should cover myself so that my poor face should be seen by none, and that I should dwell where none whom I had ever known should find me. That was all that was left to me to do–and that is what I have done. A poor wounded beast that has crawled into its hole to die–that is the end of Eugenia Ronder.”