The Adventure of the Blanched Soldier 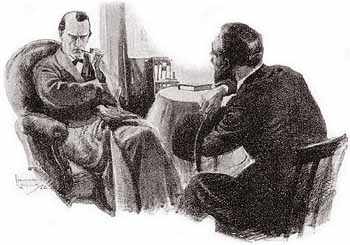 The ideas of my friend Watson, though limited, are exceedingly pertinacious. For a long time he has worried me to write an experience of my own. Perhaps I have rather invited this persecution, since I have often had occasion to point out to him how superficial are his own accounts and to accuse him of pandering to popular taste instead of confining himself rigidly to facts and figures. “Try it yourself, Holmes!” he has retorted, and I am compelled to admit that, having taken my pen in my hand, I do begin to realize that the matter must be presented in such a way as may interest the reader. The following case can hardly fail to do so, as it is among the strangest happenings in my collection though it chanced that Watson had no note of it in his collection. Speaking of my old friend and biographer, I would take this opportunity to remark that if I burden myself with a companion in my various little inquiries it is not done out of sentiment or caprice, but it is that Watson has some remarkable characteristics of his own to which in his modesty he has given small attention amid his exaggerated estimates of my own performances. A confederate who foresees your conclusions and course of action is always dangerous, but one to whom each development comes as a perpetual surprise, and to whom the future is always a closed book, is indeed an ideal helpmate.

I find from my notebook that it was in January, 1903, just after the conclusion of the Boer War, that I had my visit from Mr. James M. Dodd, a big, fresh, sunburned, upstanding Briton. The good Watson had at that time deserted me for a wife, the only selfish action which I can recall in our association. I was alone.

It is my habit to sit with my back to the window and to place my visitors in the opposite chair, where the light falls full upon them. Mr. James M. Dodd seemed somewhat at a loss how to begin the interview. I did not attempt to help him, for his silence gave me more time for observation. I have found it wise to impress clients with a sense of power, and so I gave him some of my conclusions.

“From South Africa, sir, I perceive.”

“Yes, sir,” he answered, with some surprise.

I smiled at his bewildered expression.

“When a gentleman of virile appearance enters my room with such tan upon his face as an English sun could never give, and with his handkerchief in his sleeve instead of in his pocket, it is not difficult to place him. You wear a short beard, which shows that you were not a regular. You have the cut of a riding-man. As to Middlesex, your card has already shown me that you are a stockbroker from Throgmorton Street. What other regiment would you join?”

“I see no more than you, but I have trained myself to notice what I see. However, Mr. Dodd, it was not to discuss the science of observation that you called upon me this morning. What has been happening at Tuxbury Old Park?”

“My dear sir, there is no mystery. Your letter came with that heading, and as you fixed this appointment in very pressing terms it was clear that something sudden and important had occurred.”

“Yes, indeed. But the letter was written in the afternoon, and a good deal has happened since then. If Colonel Emsworth had not kicked me out–”

“Well, that was what it amounted to. He is a hard nail, is Colonel Emsworth. The greatest martinet in the Army in his day, and it was a day of rough language, too. I couldn’t have stuck the colonel if it had not been for Godfrey’s sake.”

I LIT MY PIPE AND LEANED BACK IN MY CHAIR.

I lit my pipe and leaned back in my chair.

“Perhaps you will explain what you are talking about.”

“I had got into the way of supposing that you knew everything without being told,” said he. “But I will give you the facts, and I hope to God that you will be able to tell me what they mean. I’ve been awake all night puzzling my brain, and the more I think the more incredible does it become.

“When I joined up in January, 1901–just two years ago–young Godfrey Emsworth had joined the same squadron. He was Colonel Emsworth’s only son–Emsworth the Crimean V. C.–and he had the fighting blood in him, so it is no wonder he volunteered. There was not a finer lad in the regiment. We formed a friendship–the sort of friendship which can only be made when one lives the same life and shares the same joys and sorrows. He was my mate–and that means a good deal in the Army. We took the rough and the smooth together for a year of hard fighting. Then he was hit with a bullet from an elephant gun in the action near Diamond Hill outside-Pretoria. I got one letter from the hospital at Cape Town and one from Southampton. Since then not a word–not one word, Mr. Holmes, for six months and more, and he my closest pal.