The Adventure of the Devil’s Foot

In recording from time to time some of the curious experiences and interesting recollections which I associate with my long and intimate friendship with Mr. Sherlock Holmes, I have continually been faced by difficulties caused by his own aversion to publicity. To his sombre and cynical spirit all popular applause was always abhorrent, and nothing amused him more at the end of a successful case than to hand over the actual exposure to some orthodox official, and to listen with a mocking smile to the general chorus of misplaced congratulation. It was indeed this attitude upon the part of my friend and certainly not any lack of interesting material which has caused me of late years to lay very few of my records before the public. My participation in some of his adventures was always a privilege which entailed discretion and reticence upon me.

It was, then, with considerable surprise that I received a telegram from Holmes last Tuesday–he has never been known to write where a telegram would serve–in the following terms:

Why not tell them of the Cornish horror–strangest case I have handled.

I have no idea what backward sweep of memory had brought the matter fresh to his mind, or what freak had caused him to desire that I should recount it; but I hasten, before another cancelling telegram may arrive, to hunt out the notes which give me the exact details of the case and to lay the narrative before my readers.

It was, then, in the spring of the year 1897 that Holmes’s iron constitution showed some symptoms of giving way in the face of constant hard work of a most exacting kind, aggravated, perhaps, by occasional indiscretions of his own. In March of that year Dr. Moore Agar, of Harley Street, whose dramatic introduction to Holmes I may some day recount, gave positive injunctions that the famous private agent lay aside all his cases and surrender himself to complete rest if he wished to avert an absolute breakdown. The state of his health was not a matter in which he himself took the faintest interest, for his mental detachment was absolute, but he was induced at last, on the threat of being permanently disqualified from work, to give himself a complete change of scene and air. Thus it was that in the early spring of that year we found ourselves together in a small cottage near Poldhu Bay, at the further extremity of the Cornish peninsula.

It was a singular spot, and one peculiarly well suited to the grim humour of my patient. From the windows of our little whitewashed house, which stood high upon a grassy headland, we looked down upon the whole sinister semicircle of Mounts Bay, that old death trap of sailing vessels, with its fringe of black cliffs and surge-swept reefs on which innumerable seamen have met their end. With a northerly breeze it lies placid and sheltered, inviting the storm-tossed craft to tack into it for rest and protection.

Then come the sudden swirl round of the wind, the blistering gale from the south-west, the dragging anchor, the lee shore, and the last battle in the creaming breakers. The wise mariner stands far out from that evil place. 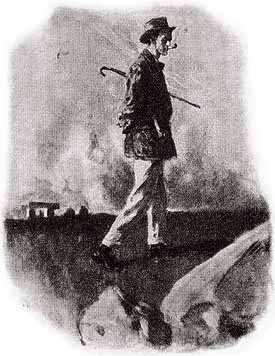 HE SPENT MUCH OF HIS TIME IN LONG WALKS.

On the land side our surroundings were as sombre as on the sea. It was a country of rolling moors, lonely and dun-colored, with an occasional church tower to mark the site of some old-world village. In every direction upon these moors there were traces of some vanished race which had passed utterly away, and left as its sole record strange monuments of stone, irregular mounds which contained the burned ashes of the dead, and curious earthworks which hinted at prehistoric strife. The glamour and mystery of the place, with its sinister atmosphere of forgotten nations, appealed to the imagination of my friend, and he spent much of his time in long walks and solitary meditations upon the moor. The ancient Cornish language had also arrested his attention, and he had, I remember, conceived the idea that it was akin to the Chaldean, and had been largely derived from the Phoenician traders in tin. He had received a consignment of books upon philology and was settling down to develop this thesis when suddenly, to my sorrow and to his unfeigned delight, we found ourselves, even in that land of dreams, plunged into a problem at our very doors which was more intense, more engrossing, and infinitely more mysterious than any of those which had driven us from London. Our simple life and peaceful, healthy routine were violently interrupted, and we were precipitated into the midst of a series of events which caused the utmost excitement not only in Cornwall but throughout the whole west of England. Many of my readers may retain some recollection of what was called at the time “The Cornish Horror,” though a most imperfect account of the matter reached the London press. Now, after thirteen years, I will give the true details of this inconceivable affair to the public.

I have said that scattered towers marked the villages which dotted this part of Cornwall. The nearest of these was the hamlet of Tredannick Wollas, where the cottages of a couple of hundred inhabitants clustered round an ancient, moss-grown church. The vicar of the parish, Mr. Roundhay, was something of an archaeologist, and as such Holmes had made his acquaintance. He was a middle-aged man, portly and affable, with a considerable fund of local lore. At his invitation we had taken tea at the vicarage and had come to know, also, Mr. Mortimer Tregennis, an independent gentleman, who increased the clergyman’s scanty resources by taking rooms in his large, straggling house. The vicar, being a bachelor, was glad to come to such an arrangement, though he had little in common with his lodger, who was a thin, dark, spectacled man, with a stoop which gave the impression of actual, physical deformity. I remember that during our short visit we found the vicar garrulous, but his lodger strangely reticent, a sad-faced, introspective man, sitting with averted eyes, brooding apparently upon his own affairs.

These were the two men who entered abruptly into our little sitting-room on Tuesday, March the 16th, shortly after our breakfast hour, as we were smoking together, preparatory to our daily excursion upon the moors.