The Disappearance of Lady Frances Carfax 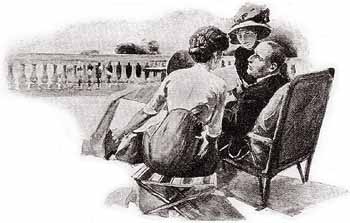 “But why Turkish?” asked Mr. Sherlock Holmes, gazing fixedly at my boots. I was reclining in a cane-backed chair at the moment, and my protruded feet had attracted his ever-active attention.

“English,” I answered in some surprise. “I got them at Latimer’s, in Oxford Street.”

Holmes smiled with an expression of weary patience.

“The bath!” he said; “the bath! Why the relaxing and expensive Turkish rather than the invigorating home-made article?”

“Because for the last few days I have been feeling rheumatic and old. A Turkish bath is what we call an alterative in medicine–a fresh starting-point, a cleanser of the system.

“By the way, Holmes,” I added, “I have no doubt the connection between my boots and a Turkish bath is a perfectly self-evident one to a logical mind, and yet I should be obliged to you if you would indicate it.”

“The train of reasoning is not very obscure, Watson,” said Holmes with a mischievous twinkle. “It belongs to the same elementary class of deduction which I should illustrate if I were to ask you who shared your cab in your drive this morning.”

“I don’t admit that a fresh illustration is an explanation,” said I with some asperity.

“Bravo, Watson! A very dignified and logical remonstrance. Let me see, what were the points? Take the last one first–the cab. You observe that you have some splashes on the left sleeve and shoulder of your coat. Had you sat in the centre of a hansom you would probably have had no splashes, and if you had they would certainly have been symmetrical. Therefore it is clear that you sat at the side. Therefore it is equally clear that you had a companion.”

“That is very evident.”

“Absurdly commonplace, is it not?”

“But the boots and the bath?”

“Equally childish. You are in the habit of doing up your boots in a certain way. I see them on this occasion fastened with an elaborate double bow, which is not your usual method of tying them. You have, therefore, had them off. Who has tied them? A bootmaker–or the boy at the bath. It is unlikely that it is the bootmaker, since your boots are nearly new. Well, what remains? The bath. Absurd, is it not? But, for all that, the Turkish bath has served a purpose.”

“You say that you have had it because you need a change. Let me suggest that you take one. How would Lausanne do, my dear Watson–first-class tickets and all expenses paid on a princely scale?”

Holmes leaned back in his armchair and took his notebook from his pocket.

“One of the most dangerous classes in the world,” said he, “is the drifting and friendless woman. She is the most harmless and often the most useful of mortals, but she is the inevitable inciter of crime in others. She is helpless. She is migratory. She has sufficient means to take her from country to country and from hotel to hotel. She is lost, as often as not, in a maze of obscure pensions and boardinghouses. She is a stray chicken in a world of foxes. When she is gobbled up she is hardly missed. I much fear that some evil has come to the Lady Frances Carfax.”

I was relieved at this sudden descent from the general to the particular. Holmes consulted his notes.

“Lady Frances,” he continued, “is the sole survivor of the direct family of the late Earl of Rufton. The estates went, as you may remember, in the male line. She was left with limited means, but with some very remarkable old Spanish jewellery of silver and curiously cut diamonds to which she was fondly attached–too attached, for she refused to leave them with her banker and always carried them about with her. A rather pathetic figure, the Lady Frances, a beautiful woman, still in fresh middle age, and yet, by a strange change, the last derelict of what only twenty years ago was a goodly fleet.”

“What has happened to her, then?”

“Ah, what has happened to the Lady Frances? Is she alive or dead? There is our problem. She is a lady of precise habits, and for four years it has been her invariable custom to write every second week to Miss Dobney, her old governess, who has long retired and lives in Camberwell. It is this Miss Dobney who has consulted me. Nearly five weeks have passed without a word. The last letter was from the Hotel National at Lausanne. Lady Frances seems to have left there and given no address. The family are anxious, and as they are exceedingly wealthy no sum will be spared if we can clear the matter up.”

“Is Miss Dobney the only source of information? Surely she had other correspondents?”

“There is one correspondent who is a sure draw, Watson. That is the bank. Single ladies must live, and their passbooks are compressed diaries. She banks at Silvester’s. I have glanced over her account. The last check but one paid her bill at Lausanne, but it was a large one and probably left her with cash in hand. Only one check has been drawn since.”

“To Miss Marie Devine. There is nothing to show where the check was drawn. It was cashed at the Credit Lyonnais at Montpellier less than three weeks ago. The sum was fifty pounds.”

“And who is Miss Marie Devine?”