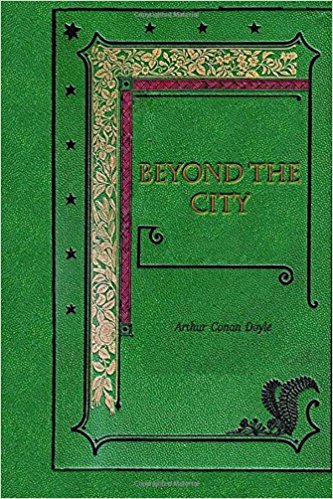 It was just three days after the Doctor and the Admiral had congratulated each other upon the closer tie which was to unite their two families, and to turn their friendship into something even dearer and more intimate, that Miss Ida Walker received a letter which caused her some surprise and considerable amusement. It was dated from next door, and was handed in by the red-headed page after breakfast.

“Dear Miss Ida,” began this curious document, and then relapsed suddenly into the third person. “Mr. Charles Westmacott hopes that he may have the extreme pleasure of a ride with Miss Ida Walker upon his tandem tricycle. Mr. Charles Westmacott will bring it round in half an hour. You in front. Yours very truly, Charles Westmacott.” The whole was written in a large, loose-jointed, and school-boyish hand, very thin on the up strokes and thick on the down, as though care and pains had gone to the fashioning of it.

Strange as was the form, the meaning was clear enough; so Ida hastened to her room, and had hardly slipped on her light grey cycling dress when she saw the tandem with its large occupant at the door. He handed her up to her saddle with a more solemn and thoughtful face than was usual with him, and a few moments later they were flying along the beautiful, smooth suburban roads in the direction of Forest Hill. The great limbs of the athlete made the heavy machine spring and quiver with every stroke; while the mignon grey figure with the laughing face, and the golden curls blowing from under the little pink-banded straw hat, simply held firmly to her perch, and let the treadles whirl round beneath her feet. Mile after mile they flew, the wind beating in her face, the trees dancing past in two long ranks on either side, until they had passed round Croydon and were approaching Norwood once more from the further side.

“Aren’t you tired?” she asked, glancing over her shoulder and turning towards him a little pink ear, a fluffy golden curl, and one blue eye twinkling from the very corner of its lid.

“Not a bit. I am just getting my swing.”

“Isn’t it wonderful to be strong? You always remind me of a steamengine.”

“Well, because it is so powerful, and reliable, and unreasoning. Well, I didn’t mean that last, you know, but—but—you know what I mean. What is the matter with you?”

“Because you have something on your mind. You have not laughed once.”

He broke into a gruesome laugh. “I am quite jolly,” said he.

“Oh, no, you are not. And why did you write me such a dreadfully stiff letter?”

“There now,” he cried, “I was sure it was stiff. I said it was absurdly stiff.”

“Then why write it?”

“It wasn’t my own composition.”

“Oh, no. It was a person of the name of Slattery.”

“I knew it would come out, I felt that it would. You’ve heard of Slattery the author?”

“He is wonderful at expressing himself. He wrote a book called ‘The Secret Solved; or, Letter-writing Made Easy.’ It gives you models of all sorts of letters.”

Ida burst out laughing. “So you actually copied one.”

“It was to invite a young lady to a picnic, but I set to work and soon got it changed so that it would do very well. Slattery seems never to have asked any one to ride a tandem. But when I had written it, it seemed so dreadfully stiff that I had to put a little beginning and end of my own, which seemed to brighten it up a good deal.”

“I thought there was something funny about the beginning and end.”

“Did you? Fancy your noticing the difference in style. How quick you are! I am very slow at things like that. I ought to have been a woodman, or game-keeper, or something. I was made on those lines. But I have found something now.”

“Ranching. I have a chum in Texas, and he says it is a rare life. I am to buy a share in his business. It is all in the open air—shooting, and riding, and sport. Would it—would it inconvenience you much, Ida, to come out there with me?”

Ida nearly fell off her perch in her amazement. The only words of which she could think were “My goodness me!” so she said them.

“If it would not upset your plans, or change your arrangements in any way.” He had slowed down and let go of the steering handle, so that the great machine crawled aimlessly about from one side of the road to the other. “I know very well that I am not clever or anything of that sort, but still I would do all I can to make you very happy. Don’t you think that in time you might come to like me a little bit?”

Ida gave a cry of fright. “I won’t like you if you run me against a brick wall,” she said, as the machine rasped up against the curb, “Do attend to the steering.”

“Oh, I don’t know. It’s too absurd! How can we talk about such things when I cannot see you? You speak to the nape of my neck, and then I have to twist my head round to answer.”

“I know. That was why I put ‘You in front’ upon my letter. I thought that it would make it easier. But if you would prefer it I will stop the machine, and then you can sit round and talk about it.”

“Good gracious!” cried Ida. “Fancy our sitting face to face on a motionless tricycle in the middle of the road, and all the people looking out of their windows at us!”

“It would look rather funny, wouldn’t it? Well, then, suppose that we both get off and push the tandem along in front of us?”

“Or I could carry the thing.”

Ida burst out laughing. “That would be more absurd still.”

“Then we will go quietly, and I will look out for the steering. I won’t talk about it at all if you would rather not. But I really do love you very much, and you would make me happy if you came to Texas with me, and I think that perhaps after a time I could make you happy too.”

“Oh, she would like it very much. I can understand that your father might not like to lose you. I’m sure I wouldn’t either, if I were he. But after all, America is not very far off nowadays, and is not so very wild. We would take a grand piano, and—and—a copy of Browning. And Denver and his wife would come over to see us. We should be quite a family party. It would be jolly.”

Ida sat listening to the stumbling words and awkward phrases which were whispered from the back of her, but there was something in Charles Westmacott’s clumsiness of speech which was more moving than the words of the most eloquent of pleaders. He paused, he stammered, he caught his breath between the words, and he blurted out in little blunt phrases all the hopes of his heart. If love had not come to her yet, there was at least pity and sympathy, which are nearly akin to it. Wonder there was also that one so weak and frail as she should shake this strong man so, should have the whole course of his life waiting for her decision. Her left hand was on the cushion at her side. He leaned forward and took it gently in his own. She did not try to draw it back from him.

“Oh, do attend to your steering,” said she, smiling round at him; “and don’t say any more about this to-day. Please don’t!”

“Oh, to-night, to-morrow, I don’t know. I must ask Clara. Talk about something else.”

And they did talk about something else; but her left hand was still enclosed in his, and he knew, without asking again, that all was well.