A Scandal in Bohemia 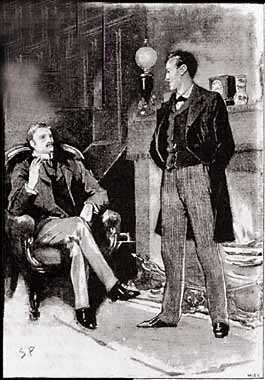 “I was also aware of that,” murmured Holmes, settling him- self down in his armchair and closing his eyes.

Our visitor glanced with some apparent surprise at the languid, lounging figure of the man who had been no doubt depicted to him as the most incisive reasoner, and most energetic agent in Europe. Holmes slowly reopened his eyes and looked impatiently at his gigantic client.

“If your Majesty would condescend to state your case,” he remarked, “I should be better able to advise you.”

The man sprang from his chair, and paced up and down the room in uncontrollable agitation. Then, with a gesture of desperation, he tore the mask from his face and hurled it upon the ground. “You are right,” he cried, “I am the King. Why should I attempt to conceal it?”

“Why, indeed?” murmured Holmes. “Your Majesty had not spoken before I was aware that I was addressing Wilhelm Gottsreich Sigismond von Ormstein, Grand Duke of Cassel-Felstein, and hereditary King of Bohemia.”

“But you can understand,” said our strange visitor, sitting down once more and passing his hand over his high, white forehead, “you can understand that I am not accustomed to doing such business in my own person. Yet the matter was so delicate that I could not confide it to an agent without putting myself in his power. I have come incognito from Prague for the purpose of consulting you.”

“Then, pray consult,” said Holmes, shutting his eyes once more.

“The facts are briefly these: Some five years ago, during a lengthy visit to Warsaw, I made the acquaintance of the well-known adventuress Irene Adler. The name is no doubt familiar to you.”

“Kindly look her up in my index, Doctor,” murmured Holmes without opening his eyes. For many years he had adopted a system of docketing all paragraphs concerning men and things, so that it was difficult to name a subject or a person on which he could not at once furnish information. In this case I found her biography sandwiched in between that of a Hebrew Rabbi and that of a staff-commander who had written a monograph upon the deep sea fishes.

“Let me see?” said Holmes. “Hum! Born in New Jersey in the year 1858. Contralto — hum! La Scala, hum! Prima donna Imperial Opera of Warsaw — yes! Retired from operatic stage — ha! Living in London — quite so! Your Majesty, as I understand, became entangled with this young person, wrote her some compromising letters, and is now desirous of getting those letters back.”

“Was there a secret marriage?”

“No legal papers or certificates?”

“Then I fail to follow your Majesty. If this young person should produce her letters for blackmailing or other purposes, how is she to prove their authenticity?”

“There is the writing.”

“We were both in the photograph.”

“Oh, dear! That is very bad! Your Majesty has indeed committed an indiscretion.”

“You have compromised yourself seriously.”

“I was only Crown Prince then. I was young. I am but thirty now.”

“It must be recovered.”

“We have tried and failed.”

“Your Majesty must pay. It must be bought.”

“She will not sell.”

“Five attempts have been made. Twice burglars in my pay ransacked her house. Once we diverted her luggage when she travelled. Twice she has been waylaid. There has been no result.”

Holmes laughed. “It is quite a pretty little problem,” said he.

“But a very serious one to me,” returned the King, reproachfully.

“Very, indeed. And what does she propose to do with the photograph?”

“I am about to be married.”

“To Clotilde Lothman von Saxe-Meningen, second daughter of the King of Scandinavia. You may know the strict principles of her family. She is herself the very soul of delicacy. A shadow of a doubt as to my conduct would bring the matter to an end.”

“Threatens to send them the photograph. And she will do it. I know that she will do it. You do not know her, but she has a soul of steel. She has the face of the most beautiful of women, and the mind of the most resolute of men. Rather than I should marry another woman, there are no lengths to which she would not go — none.”

“You are sure that she has not sent it yet?”

“Because she has said that she would send it on the day when the betrothal was publicly proclaimed. That will be next Monday.”

“Oh, then, we have three days yet,” said Holmes, with a yawn. “That is very fortunate, as I have one or two matters of importance to look into just at present. Your Majesty will, of course, stay in London for the present?”

“Certainly. You will find me at the Langham, under the name of the Count Von Kramm.”

“Then I shall drop you a line to let you know how we progress.”

“Pray do so. I shall be all anxiety.”

“You have carte blanche.”

“I tell you that I would give one of the provinces of my kingdom to have that photograph.”

“And for present expenses?”

The King took a heavy chamois leather bag from under his cloak, and laid it on the table.

“There are three hundred pounds in gold, and seven hundred in notes,” he said.

Holmes scribbled a receipt upon a sheet of his note-book, and handed it to him.

“And mademoiselle’s address?” he asked.

Holmes took a note of it. “One other question,” said he. “Was the photograph a cabinet?”

“Then, good night, your Majesty, and I trust that we shall soon have some good news for you. And good night, Watson,” he added, as the wheels of the Royal brougham rolled down the street. “If you wlll be good enough to call tomorrow afternoon at three o’clock I should like to chat this little matter over with you.”

At three o’clock precisely I was at Baker-street, but Holmes had not yet returned. The landlady informed me that he had left the house shortly after eight o’clock in the morning. I sat down beside the fire, however, with the intention of awaiting him, however long he might be. I was already deeply interested in his inquiry, for, though it was surrounded by none of the grim and strange features which were associated with the two crimes which I have already recorded, still, the nature of the case and the exalted station of his client gave it a character of its own. Indeed, apart from the nature of the investigation which my friend had on hand, there was something in his masterly grasp of a situation, and his keen, incisive reasoning, which made it a pleasure to me to study his system of work, and to follow the quick, subtle methods by which he disentangled the most inextricable mysteries. So accustomed was I to his invariable success that the very possibility of his failing had ceased to enter into my head.

It was close upon four before the door opened, and a drunken- looking groom, ill-kempt and side-whiskered, with an inflamed face and disreputable clothes, walked into the room. Accustomed as I was to my friend’s amazing powers in the use of disguises, I had to look three times before I was certain that it was indeed he. With a nod he vanished into the bedroom, whence he emerged in five minutes tweed-suited and respectable, as of old. Putting his hands into his pockets, he stretched out his legs in front of the fire, and laughed heartily for some minutes.

“Well, really!” he cried, and then he choked; and laughed again until he was obliged to lie back, limp and helpless, in the chair.

“It’s quite too funny. I am sure you could never guess how I employed my morning, or what I ended by doing.”

“I can’t imagine. I suppose that you have been watching the habits, and perhaps the house, of Miss Irene Adler.”

“Quite so, but the sequel was rather unusual. I will tell you, however. I left the house a little after eight o’clock this morning, in the character of a groom out of work. There is a wonderful sympathy and freemasonry among horsey men. Be one of them, and you will know all that there is to know. I soon found Briony Lodge. It is a bijou villa, with a garden at the back, but built out in front right up to the road, two stories. Chubb lock to the door. Large sitting-room on the right side, well furnished, with long windows almost to the floor, and those preposterous English window fasteners which a child could open. Behind there was nothing remarkable, save that the passage window could be reached from the top of the coach-house. I walked round it and examined it closely from every point of view, but without noting anything else of interest.

“I then lounged down the street, and found, as I expected, that there was a mews in a lane which runs down by one wall of the garden. I lent the ostlers a hand in rubbing down their horses, and received in exchange twopence, a glass of half-and-half, two fills of shag tobacco, and as much information as I could desire about Miss Adler, to say nothing of half a dozen other people in the neighbourhood in whom I was not in the least interested, but whose biographies I was compelled to listen to.”

“And what of Irene Adler?” I asked.

“Oh, she has turned all the men’s heads down in that part. She is the daintiest thing under a bonnet on this planet. So say the Serpentine-mews, to a man. She lives quietly, sings at concerts, drives out at five every day, and returns at seven sharp for dinner. Seldom goes out at other times, except when she sings. Has only one male visitor, but a good deal of him. He is dark, handsome, and dashing; never calls less than once a day, and often twice. He is a Mr. Godfrey Norton, of the Inner Temple. See the advantages of a cabman as a confidant. They had driven him home a dozen times from Serpentine-mews, and knew all about him. When I had listened to all they had to tell, I began to walk up and down near Briony Lodge once more, and to think over my plan of campaign.