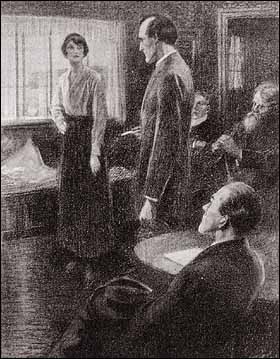 The inspector and I cried out at the sight. There, crisscrossed upon the man’s naked shoulder, was the same strange reticulated pattern of red, inflamed lines which had been the death-mark of Fitzroy McPherson.

The pain was evidently terrible and was more than local, for the sufferer’s breathing would stop for a time, his face would turn black, and then with loud gasps he would clap his hand to his heart, while his brow dropped beads of sweat. At any moment he might die. More and more brandy was poured down his throat, each fresh dose bringing him back to life. Pads of cotton-wool soaked in salad-oil seemed to take the agony from the strange wounds. At last his head fell heavily upon the cushion. Exhausted Nature had taken refuge in its last storehouse of vitality. It was half a sleep and half a faint, but at least it was ease from pain.

To question him had been impossible, but the moment we were assured of his condition Stackhurst turned upon me.

“Where did you find him?”

“Down on the beach. Exactly where poor McPherson met his end. If this man’s heart had been weak as McPherson’s was, he would not be here now. More than once I thought he was gone as I brought him up. It was too far to The Gables, so I made for you.”

“Did you see him on the beach?”

“I was walking on the cliff when I heard his cry. He was at the edge of the water, reeling about like a drunken man. I ran down, threw some clothes about him, and brought him up. For heaven’s sake, Holmes, use all the powers you have and spare no pains to lift the curse from this place, for life is becoming unendurable. Can you, with all your world-wide reputation, do nothing for us?”

“I think I can, Stackhurst. Come with me now! And you, Inspector, come along! We will see if we cannot deliver this murderer into your hands.”

Leaving the unconscious man in the charge of my housekeeper, we all three went down to the deadly lagoon. On the shingle there was piled a little heap of towels and clothes left by the stricken man. Slowly I walked round the edge of the water, my comrades in Indian file behind me. Most of the pool was quite shallow, but under the cliff where the beach was hollowed out it was four or five feet deep. It was to this part that a swimmer would naturally go, for it formed a beautiful pellucid green pool as clear as crystal. A line of rocks lay above it at the base of the cliff, and along this I led the way, peering eagerly into the depths beneath me. I had reached the deepest and stillest pool when my eyes caught that for which they were searching, and I burst into a shout of triumph.

The strange object at which I pointed did indeed look like a tangled mass torn from the mane of a lion. It lay upon a rocky shelf some three feet under the water, a curious waving, vibrating, hairy creature with streaks of silver among its yellow tresses. It pulsated with a slow, heavy dilation and contraction.

“It has done mischief enough. Its day is over!” I cried. “Help me, Stackhurst! Let us end the murderer forever.”

There was a big boulder just above the ledge, and we pushed it until it fell with a tremendous splash into the water. When the ripples had cleared we saw that it had settled upon the ledge below. One flapping edge of yellow membrane showed that our victim was beneath it. A thick oily scum oozed out from below the stone and stained the water round, rising slowly to the surface.

“Well, this gets me!” cried the inspector. “What was it, Mr. Holmes? I’m born and bred in these parts, but I never saw such a thing. It don’t belong to Sussex.”

“Just as well for Sussex,” I remarked. “It may have been the southwest gale that brought it up. Come back to my house, both of you, and I will give you the terrible experience of one who has good reason to remember his own meeting with the same peril of the seas.”

When we reached my study we found that Murdoch was so far recovered that he could sit up. He was dazed in mind, and every now and then was shaken by a paroxysm of pain. In broken words he explained that he had no notion what had occurred to him, save that terrific pangs had suddenly shot through him, and that it had taken all his fortitude to reach the bank.

“Here is a book,” I said, taking up the little volume, “which first brought light into what might have been forever dark. It is ‘Out of Doors’, by the famous observer, J. G. Wood. Wood himself very nearly perished from contact with this vile creature, so he wrote with a very full knowledge. Cyanea capillata is the miscreant’s full name, and he can be as dangerous to life as, and far more painful than, the bite of the cobra. Let me briefly give this extract.

“‘If the bather should see a loose roundish mass of tawny membranes and fibres, something like very large handfuls of lion’s mane and silver paper, let him beware, for this is the fearful stinger, Cyanea capillata.’

“Could our sinister acquaintance be more clearly described?

“He goes on to tell of his own encounter with one when swimming off the coast of Kent. He found that the creature radiated almost invisible filaments to the distance of fifty feet, and that anyone within that circumference from the deadly centre was in danger of death. Even at a distance the effect upon Wood was almost fatal.

“‘The multitudinous threads caused light scarlet lines upon the skin which on closer examination resolved into minute dots or pustules, each dot charged as it were with a red-hot needle making its way through the nerves.’