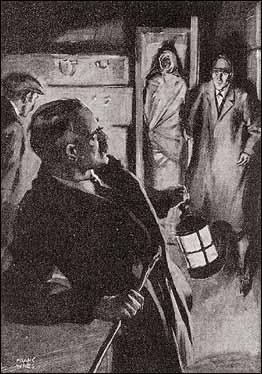 “Because I have seen him, Mr. Holmes. It was on that second night. Sir Robert turned and passed us–me and Stephens, quaking in the bushes like two bunny-rabbits, for there was a bit of moon that night. But we could hear the other moving about behind. We were not afraid of him. So we up when Sir Robert was gone and pretended we were just having a walk like in the moonlight, and so we came right on him as casual and innocent as you please. ‘Hullo, mate! who may you be?’ says I. I guess he had not heard us coming, so he looked over his shoulder with a face as if he had seen the devil coming out of hell. He let out a yell, and away he went as hard as he could lick it in the darkness. He could run! –I’ll give him that. In a minute he was out of sight and hearing, and who he was, or what he was, we never found.” 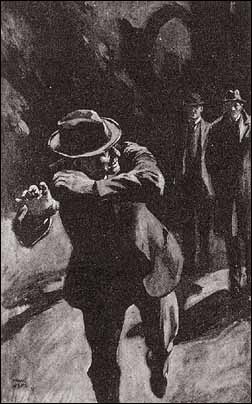 “HE LOOKED OVER HIS SHOULDER WITH A FACE AS IF HE HAD SEEN THE DEVIL COMING OUT OF HELL.”

“But you saw him clearly in the moonlight?”

“Yes, I would swear to his yellow face–a mean dog, I should say. What could he have in common with Sir Robert?”

Holmes sat for some time lost in thought.

“Who keeps Lady Beatrice Falder company?” he asked at last.

“There is her maid, Carrie Evans. She has been with her this five years.”

“She’s devoted enough,” he answered at last. “But I won’t say to whom.”

“I can’t tell tales out of school.”

“I quite understand, Mr. Mason. Of course, the situation is clear enough. From Dr. Watson’s description of Sir Robert I can realize that no woman is safe from him. Don’t you think the quarrel between brother and sister may lie there?”

“Well, the scandal has been pretty clear for a long time.”

“But she may not have seen it before. Let us suppose that she has suddenly found it out. She wants to get rid of the woman. Her brother will not permit it. The invalid, with her weak heart and inability to get about, has no means of enforcing her will. The hated maid is still tied to her. The lady refuses to speak, sulks, takes to drink. Sir Robert in his anger takes her pet spaniel away from her. Does not all this hang together?”

“Exactly! As far as it goes. How would all that bear upon the visits by night to the old crypt? We can’t fit that into our plot.”

“No, sir, and there is something more that I can’t fit in. Why should Sir Robert want to dig up a dead body?”

“We only found it out yesterday–after I had written to you. Yesterday Sir Robert had gone to London, so Stephens and I went down to the crypt. It was all in order, sir, except that in one corner was a bit of a human body.”

“You informed the police, I suppose?”

“Well, sir, I think it would hardly interest them. It was just the head and a few bones of a mummy. It may have been a thousand years old. But it wasn’t there before. That I’ll swear, and so will Stephens. It had been stowed away in a corner and covered over with a board, but that corner had always been empty before.”

“Well, we just left it there.”

“That was wise. You say Sir Robert was away yesterday. Has he returned?”

“We expect him back to-day.”

“When did Sir Robert give away his sister’s dog?”

“It was just a week ago to-day. The creature was howling outside the old wellhouse, and Sir Robert was in one of his tantrums that morning. He caught it up, and I thought he would have killed it. Then he gave it to Sandy Bain, the jockey, and told him to take the dog to old Barnes at the Green Dragon, for he never wished to see it again.”

Holmes sat for some time in silent thought. He had lit the oldest and foulest of his pipes.