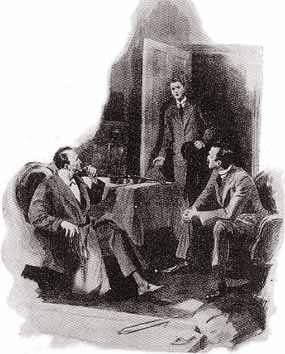 “This matter is very delicate, Mr. Holmes,” he said. “Consider the relation in which I stand to Professor Presbury both privately and publicly. I really can hardly justify myself if I speak before any third person.”

“Have no fear, Mr. Bennett. Dr. Watson is the very soul of discretion, and I can assure you that this is a matter in which I am very likely to need an assistant.”

“As you like, Mr. Holmes. You will, I am sure, understand my having some reserves in the matter.”

“You will appreciate it, Watson, when I tell you that this gentleman, Mr. Trevor Bennett, is professional assistant to the great scientist, lives under his roof, and is engaged to his only daughter. Certainly we must agree that the professor has every claim upon his loyalty and devotion. But it may best be shown by taking the necessary steps to clear up this strange mystery.”

“I hope so, Mr. Holmes. That is my one object. Does Dr. Watson know the situation?”

“I have not had time to explain it.”

“Then perhaps I had better go over the ground again before explaining some fresh developments.”

“I will do so myself,” said Holmes, “in order to show that I have the events in their due order. The professor, Watson, is a man of European reputation. His life has been academic. There has never been a breath of scandal. He is a widower with one daughter, Edith. He is, I gather, a man of very virile and positive, one might almost say combative, character. So the matter stood until a very few months ago.

“Then the current of his life was broken. He is sixty-one years of age, but he became engaged to the daughter of Professor Morphy, his colleague in the chair of comparative anatomy. It was not, as I understand, the reasoned courting of an elderly man but rather the passionate frenzy of youth, for no one could have shown himself a more devoted lover. The lady, Alice Morphy, was a very perfect girl both in mind and body, so that there was every excuse for the professor’s infatuation. None the less, it did not meet with full approval in his own family.”

“We thought it rather excessive,” said our visitor.

“Exactly. Excessive and a little violent and unnatural. Professor Presbury was rich, however, and there was no objection upon the part of the father. The daughter, however, had other views, and there were already several candidates for her hand, who, if they were less eligible from a worldly point of view, were at least more of an age. The girl seemed to like the professor in spite of his eccentricities. It was only age which stood in the way.

“About this time a little mystery suddenly clouded the normal routine of the professor’s life. He did what he had never done before. He left home and gave no indication where he was going. He was away a fortnight and returned looking rather travel-worn. He made no allusion to where he had been, although he was usually the frankest of men. It chanced, however, that our client here, Mr. Bennett, received a letter from a fellowstudent in Prague, who said that he was glad to have seen Professor Presbury there, although he had not been able to talk to him. Only in this way did his own household learn where he had been.

“Now comes the point. From that time onward a curious change came over the professor. He became furtive and sly. Those around him had always the feeling that he was not the man that they had known, but that he was under some shadow which had darkened his higher qualities. His intellect was not affected. His lectures were as brilliant as ever. But always there was something new, something sinister and unexpected. His daughter, who was devoted to him, tried again and again to resume the old relations and to penetrate this mask which her father seemed to have put on. You, sir, as I understand, did the same–but all was in vain. And now, Mr. Bennett, tell in your own words the incident of the letters.”

“You must understand, Dr. Watson, that the professor had no secrets from me. If I were his son or his younger brother I could not have more completely enjoyed his confidence. As his secretary I handled every paper which came to him, and I opened and subdivided his letters. Shortly after his return all this was changed. He told me that certain letters might come to him from London which would be marked by a cross under the stamp. These were to be set aside for his own eyes only. I may say that several of these did pass through my hands, that they had the E. C. mark, and were in an illiterate handwriting. If he answered them at all the answers did not pass through my hands nor into the letterbasket in which our correspondence was collected.”

“And the box,” said Holmes.

“Ah, yes, the box. The professor brought back a little wooden box from his travels. It was the one thing which suggested a Continental tour, for it was one of those quaint carved things which one associates with Germany. This he placed in his instrument cupboard. One day, in looking for a canula, I took up the box. To my surprise he was very angry, and reproved me in words which were quite savage for my curiosity. It was the first time such a thing had happened, and I was deeply hurt. I endeavoured to explain that it was a mere accident that I had touched the box, but all the evening I was conscious that he looked at me harshly and that the incident was rankling in his mind.” Mr. Bennett drew a little diary book from his pocket. “That was on July 2d,” said he.