The Adventure of the Three Gables 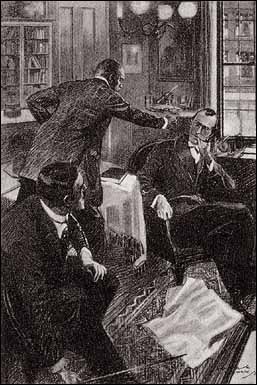 Holmes inspected the sheet of paper.

“What do you make of it, Inspector?”

“Seems to be the end of some queer novel, so far as I can see.”

“Well, I suppose the burglars got those. Much good may it do them!”

“It seems a queer thing to break into a house in order to steal such papers as that. Does it suggest anything to you, Inspector?”

“Yes, sir, it suggests that in their hurry the rascals just grabbed at what came first to hand. I wish them joy of what they got.”

“Why should they go to my son’s things?” asked Mrs. Maberley.

“Well, they found nothing valuable downstairs, so they tried their luck upstairs. That is how I read it. What do you make of it, Mr. Holmes?”

“I must think it over, Inspector. Come to the window, Watson.” Then, as we stood together, he read over the fragment of paper. It began in the middle of a sentence and ran like this:

“…face bled considerably from the cuts and blows, but it was nothing to the bleeding of his heart as he saw that lovely face, the face for which he had been prepared to sacrifice his very life, looking out at his agony and humiliation. She smiled–yes, by Heaven! she smiled, like the heartless fiend she was, as he looked up at her. It was at that moment that love died and hate was born. Man must live for something. If it is not for your embrace, my lady, then it shall surely be for your undoing and my complete revenge.”

“Queer grammar!” said Holmes with a smile as he handed the paper back to the inspector. “Did you notice how the ‘he’ suddenly changed to ‘my’? The writer was so carried away by his own story that he imagined himself at the supreme moment to be the hero.”

“It seemed mighty poor stuff,” said the inspector as he replaced it in his book. “What! are you off, Mr. Holmes?”

“I don’t think there is anything more for me to do now that the case is in such capable hands. By the way, Mrs. Maberley, did you say you wished to travel?”

“It has always been my dream, Mr. Holmes.”

“Where would you like to go–Cairo, Madeira, the Riviera?”

“Oh if I had the money I would go round the world.”

“Quite so. Round the world. Well, good-morning. I may drop you a line in the evening.” As we passed the window I caught a glimpse of the inspector’s smile and shake of the head. “These clever fellows have always a touch of madness.” That was what I read in the inspector’s smile.

“Now, Watson, we are at the last lap of our little journey,” said Holmes when we were back in the roar of central London once more. “I think we had best clear the matter up at once, and it would be well that you should come with me, for it is safer to have a witness when you are dealing with such a lady as Isadora Klein.”

We had taken a cab and were speeding to some address in Grosvenor Square. Holmes had been sunk in thought, but he roused himself suddenly.

“By the way, Watson, I suppose you see it all clearly?”

“No, I can’t say that I do. I only gather that we are going to see the lady who is behind all this mischief.”

“Exactly! But does the name Isadora Klein convey nothing to you? She was, of course, the celebrated beauty. There was never a woman to touch her. She is pure Spanish, the real blood of the masterfui Conquistadors, and her people have been leaders in Pernambuco for generations. She married the aged German sugar king, Klein, and presently found herself the richest as well as the most lovely widow upon earth. Then there was an interval of adventure when she pleased her own tastes. She had several lovers, and Douglas Maberley, one of the most striking men in London, was one of them. It was by all accounts more than an adventure with him. He was not a society butterfly but a strong, proud man who gave and expected all. But she is the ‘belle dame sans merci’ of fiction. When her caprice is satisfied the matter is ended, and if the other party in the matter can’t take her word for it she knows how to bring it home to him.”

“Then that was his own story–”

“Ah! you are piecing it together now. I hear that she is about to marry the young Duke of Lomond, who might almost be her son. His Grace’s ma might overlook the age, but a big scandal would be a different matter, so it is imperative–Ah! here we are.”

It was one of the finest corner-houses of the West End. A machine-like footman took up our cards and returned with word that the lady was not at home. “Then we shall wait until she is,” said Holmes cheerfully.