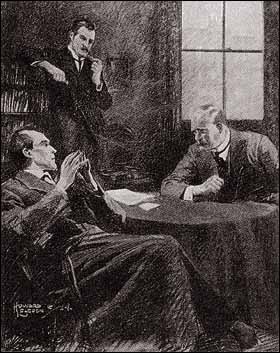 “I saw that the word ‘plough’ was misspelt.”

“Oh, you did notice that, did you? Come, Watson, you improve all the time. Yes, it was bad English but good American. The printer had set it up as received. Then the buckboards. That is American also. And artesian wells are commoner with them than with us. It was a typical American advertisement, but purporting to be from an English firm. What do you make of that?”

“I can only suppose that this American lawyer put it in himself. What his object was I fail to understand.”

“Well, there are alternative explanations. Anyhow, he wanted to get this good old fossil up to Birmingham. That is very clear. I might have told him that he was clearly going on a wild-goose chase, but, on second thoughts, it seemed better to clear the stage by letting him go. To-morrow, Watson–well, to-morrow will speak for itself.”

Holmes was up and out early. When he returned at lunchtime I noticed that his face was very grave.

“This is a more serious matter than I had expected, Watson,” said he. “It is fair to tell you so, though I know it will only be an additional reason to you for running your head into danger. I should know my Watson by now. But there is danger, and you should know it.”

“Well, it is not the first we have shared, Holmes. I hope it may not be the last. What is the particular danger this time?”

“We are up against a very hard case. I have identified Mr. John Garrideb, Counsellor at Law. He is none other than ‘Killer’ Evans, of sinister and murderous reputation.”

“Ah, it is not part of your profession to carry about a portable Newgate Calendar in your memory. I have been down to see friend Lestrade at the Yard. There may be an occasional want of imaginative intuition down there, but they lead the world for thoroughness and method. I had an idea that we might get on the track of our American friend in their records. Sure enough, I found his chubby face smiling up at me from the rogues’ portrait gallery. ‘James Winter, alias Morecroft, alias Killer Evans,’ was the inscription below.” Holmes drew an envelope from his pocket. “I scribbled down a few points from his dossier: Aged forty-four. Native of Chicago. Known to have shot three men in the States. Escaped from penitentiary through political influence. Came to London in 1893. Shot a man over cards in a night-club in the Waterloo Road in January, 1895. Man died, but he was shown to have been the aggressor in the row. Dead man was identified as Rodger Prescott, famous as forger and coiner in Chicago. Killer Evans released in 1901. Has been under police supervision since, but so far as known has led an honest life. Very dangerous man, usually carries arms and is prepared to use them. That is our bird, Watson–a sporting bird, as you must admit.”

“Well, it begins to define itself. I have been to the houseagent’s. Our client, as he told us, has been there five years. It was unlet for a year before then. The previous tenant was a gentleman at large named Waldron. Waldron’s appearance was well remembered at the office. He had suddenly vanished and nothing more been heard of him. He was a tall, bearded man with very dark features. Now, Prescott, the man whom Killer Evans had shot, was, according to Scotland Yard, a tall, dark man with a beard. As a working hypothesis, I think we may take it that Prescott, the American criminal, used to live in the very room which our innocent friend now devotes to his museum. So at last we get a link, you see.”

“And the next link?”

“Well, we must go now and look for that.”

He took a revolver from the drawer and handed it to me.

“I have my old favourite with me. If our Wild West friend tries to live up to his nickname, we must be ready for him. I’ll give you an hour for a siesta, Watson, and then I think it will be time for our Ryder Street adventure.”

It was just four o’clock when we reached the curious apartment of Nathan Garrideb. Mrs. Saunders, the caretaker, was about to leave, but she had no hesitation in admitting us, for the door shut with a spring lock, and Holmes promised to see that all was safe before we left. Shortly afterwards the outer door closed, her bonnet passed the bow window, and we knew that we were alone in the lower floor of the house. Holmes made a rapid examination of the premises. There was one cupboard in a dark corner which stood out a little from the wall. It was behind this that we eventually crouched while Holmes in a whisper outlined his intentions.

“He wanted to get our amiable friend out of his room–that is very clear, and, as the collector never went out, it took some planning to do it. The whole of this Garrideb invention was apparently for no other end. I must say, Watson, that there is a certain devilish ingenuity about it, even if the queer name of the tenant did give him an opening which he could hardly have expected. He wove his plot with remarkable cunning.”

“Well, that is what we are here to find out. It has nothing whatever to do with our client, so far as I can read the situation. It is something connected with the man he murdered–the man who may have been his confederate in crime. There is some guilty secret in the room. That is how I read it. At first I thought our friend might have something in his collection more valuable than he knew–something worth the attention of a big criminal. But the fact that Rodger Prescott of evil memory inhabited these rooms points to some deeper reason. Well, Watson, we can but possess our souls in patience and see what the hour may bring.”