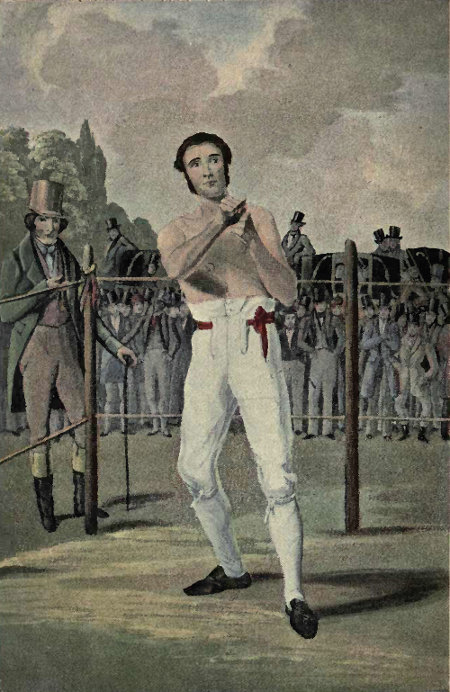 A great hush fell over the huge assembly. Even the dogs stopped yapping; one might have thought that the monstrous room was empty. The two men had stood up, the small white gloves over their hands. They advanced from their corners and shook hands: Montgomery, gravely, Craggs with a smile. Then they fell into position. The crowd gave a long sigh—the intake of a thousand excited breaths. The referee tilted his chair on to its back legs, and looked moodily critical from the one to the other.

It was strength against activity—that was evident from the first. The Master stood stolidly upon his K-leg. It gave him a tremendous pedestal; one could hardly imagine his being knocked down. And he could pivot round upon it with extraordinary quickness; but his advance or retreat was ungainly. His frame, however, was so much larger and broader than that of the student, and his brown, massive face looked so resolute and menacing, that the hearts of the Wilson party sank within them. There was one heart, however, which had not done so. It was that of Robert Montgomery.

Any nervousness which he may have had completely passed away now that he had his work before him. Here was something definite—this hard-faced, deformed Hercules to beat, with a career as the price of beating him. He glowed with the joy of action; it thrilled through his nerves. He faced his man with little in-and-out steps, breaking to the left, breaking to the right, feeling his way, while Craggs, with a dull, malignant eye, pivoted slowly upon his weak leg, his left arm half extended, his right sunk low across the mark. Montgomery led with his left, and then led again, getting lightly home each time. He tried again, but the Master had his counter ready, and Montgomery reeled back from a harder blow than he had given. Anastasia, the woman, gave a shrill cry of encouragement, and her man let fly his right. Montgomery ducked under it, and in an instant the two were in each other’s arms.

The Master struck upwards on the break, and shook Montgomery with the blow. Then it was “time.” It had been a spirited opening round. The people buzzed into comment and applause. Montgomery was quite fresh, but the hairy chest of the Master was rising and falling. The man passed a sponge over his head, while Anastasia flapped the towel before him. “Good lass! Good lass!” cried the crowd, and cheered her.

The men were up again, the Master grimly watchful, Montgomery as alert as a kitten. The Master tried a sudden rush, squattering along with his awkward gait, but coming faster than one would think. The student slipped aside and avoided him. The Master stopped, grinned, and shook his head. Then he motioned with his hand as an invitation to Montgomery to come to him. The student did so and led with his left, but got a swinging right counter in the ribs in exchange. The heavy blow staggered him, and the Master came scrambling in to complete his advantage; but Montgomery, with his greater activity, kept out of danger until the call of “time.” A tame round, and the advantage with the Master.

“T’ Maister’s too strong for him,” said a smelter to his neighbour.

“Ay; but t’other’s a likely lad. Happen we’ll see some sport yet. He can joomp rarely.”

“But t’ Maister can stop and hit rarely. Happen he’ll mak’ him joomp when he gets his nief upon him.”

They were up again, the water glistening upon their faces. Montgomery led instantly and got his right home with a sounding smack upon the Master’s forehead. There was a shout from the colliers, and “Silence! Order!” from the referee. Montgomery avoided the counter and scored with his left. Fresh applause, and the referee upon his feet in indignation. “No comments, gentlemen, if you please, during the rounds.”

Montgomery rubbed in the point by a flush hit upon the mouth, and the Master shambled back to his corner like an angry bear, having had all the worst of the round.

“Where’s thot seven to one?” shouted Purvis, the publican. “I’ll take six to one!”

There were no answers.

“Five to one!” There were givers at that. Purvis booked them in a tattered notebook.

Montgomery began to feel happy. He lay back with his legs outstretched, his back against the corner-post, and one gloved hand upon each rope. What a delicious minute it was between each round. If he could only keep out of harm’s way, he must surely wear this man out before the end of twenty rounds. He was so slow that all his strength went for nothing. “You’re fightin’ a winnin’ fight—a winnin’ fight,” Ted Barton whispered in his ear. “Go canny; tak’ no chances; you have him proper.”

But the Master was crafty. He had fought so many battles with his maimed limb that he knew how to make the best of it. Warily and slowly he manœuvred round Montgomery, stepping forward and yet again forward until he had imperceptibly backed him into his corner. The student suddenly saw a flash of triumph upon the grim face, and a gleam in the dull, malignant eyes. The Master was upon him. He sprang aside and was on the ropes. The Master smashed in one of his terrible upper-cuts, and Montgomery half broke it with his guard. The student sprang the other way and was against the other converging rope. He was trapped in the angle. The Master sent in another, with a hoggish grunt which spoke of the energy behind it. Montgomery ducked, but got a jab from the left upon the mark. He closed with his man. “Break away! Break away?” cried the referee. Montgomery disengaged, and got a swinging blow on the ear as he did so. It had been a damaging round for him, and the Croxley people were shouting their delight.

“Gentlemen, I will not have this noise!” Stapleton roared. “I have been accustomed to preside at a well-conducted club, and not at a bear-garden.” This little man, with the tilted hat and the bulging forehead, dominated the whole assembly. He was like a headmaster among his boys. He glared round him, and nobody cared to meet his eye.

Anastasia had kissed the Master when he resumed his seat. “Good lass. Do’t again!” cried the laughing crowd, and the angry Master shook his glove at her, as she flapped her towel in front of him. Montgomery was weary and a little sore, but not depressed. He had learned something. He would not again be tempted into danger.

For three rounds the honours were fairly equal. The student’s hitting was the quicker, the Master’s the harder. Profiting by his lesson, Montgomery kept himself in the open, and refused to be herded into a corner. Sometimes the Master succeeded in rushing him to the side-ropes, but the younger man slipped away, or closed and then disengaged. The monotonous “Break away! Break away!” of the referee broke in upon the quick, low patter of rubber-soled shoes, the dull thud of the blows, and the sharp, hissing breath of two tired men.