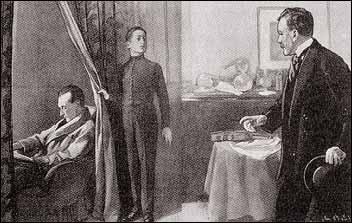 “You can go, Billy. That boy is a problem, Watson. How far am I justified in allowing him to be in danger?”

“Danger of what, Holmes?”

“Of sudden death. I’m expecting something this evening.”

“To be murdered, Watson.”

“Even my limited sense of humour could evolve a better joke than that. But we may be comfortable in the meantime, may we not? Is alcohol permitted? The gasogene and cigars are in the old place. Let me see you once more in the customary armchair. You have not, I hope, learned to despise my pipe and my lamentable tobacco? It has to take the place of food these days.”

“Because the faculties become refined when you starve them. Why, surely, as a doctor, my dear Watson, you must admit that what your digestion gains in the way of blood supply is so much lost to the brain. I am a brain, Watson. The rest of me is a mere appendix. Therefore, it is the brain I must consider.”

“But this danger, Holmes?”

“Ah. yes, in case it should come off, it would perhaps be as well that you should burden your memory with the name and address of the murderer. You can give it to Scotland Yard, with my love and a parting blessing. Sylvius is the name–Count Negretto Sylvius. Write it down, man, write it down! 136 Moorside Gardens, N. W. Got it?”

Watson’s honest face was twitching with anxiety. He knew only too well the immense risks taken by Holmes and was well aware that what he said was more likely to be under-statement than exaggeration. Watson was always the man of action, and he rose to the occasion.

“Count me in, Holmes. I have nothing to do for a day or two.”

“Your morals don’t improve, Watson. You have added fibbing to your other vices. You bear every sign of the busy medical man, with calls on him every hour.”

“Not such important ones. But can’t you have this fellow arrested?”

“Yes, Watson, I could. That’s what worries him so.”

“Because I don’t know where the diamond is.”

“Yes, the great yellow Mazarin stone. I’ve cast my net and I have my fish. But I have not got the stone. What is the use of taking them? We can make the world a better place by laying them by the heels. But that is not what I am out for. It’s the stone I want.”

“And is this Count Sylvius one of your fish?”

“Yes, and he’s a shark. He bites. The other is Sam Merton the boxer. Not a bad fellow, Sam, but the Count has used him. Sam’s not a shark. He is a great big silly bull-headed gudgeon. But he is flopping about in my net all the same.”

“Where is this Count Sylvius?”

“I’ve been at his very elbow all the morning. You’ve seen me as an old lady, Watson. I was never more convincing. He actually picked up my parasol for me once. ‘By your leave, madame,’ said he–half-ltalian, you know, and with the Southern graces of manner when in the mood, but a devil incarnate in the other mood. Life is full of whimsical happenings, Watson.”

“Well, perhaps it might. I followed him to old Straubenzee’s workshop in the Minories. Straubenzee made the air-gun–a very pretty bit of work, as I understand, and I rather fancy it is in the opposite window at the present moment. Have you seen the dummy? Of course, Billy showed it to you. Well, it may get a bullet through its beautiful head at any moment. Ah, Billy, what is it?”

The boy had reappeared in the room with a card upon a tray. Holmes glanced at it with raised eyebrows and an amused smile.

“The man himself. I had hardly expected this. Grasp the nettle, Watson! A man of nerve. Possibly you have heard of his reputation as a shooter of big game. It would indeed be a triumphant ending to his excellent sporting record if he added me to his bag. This is a proof that he feels my toe very close behind his heel.”