Billy had appeared in answer to a ring.

“I think, Count, that it would be as well to have your friend Sam at this conference. After all, his interests should be represented. Billy, you will see a large and ugly gentleman outside the front door. Ask him to come up.”

“No violence, Billy. Don’t be rough with him. If you tell him that Count Sylvius wants him he will certainly come.”

“What are you going to do now?” asked the Count as Billy disappeared.

“My friend Watson was with me just now. I told him that I had a shark and a gudgeon in my net; now I am drawing the net and up they come together.”

The Count had risen from his chair, and his hand was behind his back. Holmes held something half protruding from the pocket of his dressing-gown.

“I have often had the same idea. Does it matter very much? Aher all, Count, your own exit is more likely to be perpendicular than horizontal. But these anticipations of the future are morbid. Why not give ourselves up to the unrestrained enjoyment of the present?”

A sudden wild-beast light sprang up in the dark, menacing eyes of the master criminal. Holmes’s figure seemed to grow taller as he grew tense and ready.

The prize-fighter, a heavily built young man with a stupid, obstinate, slab-sided face, stood awkwardly at the door, looking about him with a puzzled expression. Holmes’s debonair manner was a new experience, and though he vaguely felt that it was hostile, he did not know how to counter it. He turned to his more astute comrade for help.

“What’s the game now, Count? What’s this fellow want? What’s up?” His voice was deep and raucous.

The Count shrugged his shoulders, and it was Holmes who answered.

The boxer still addressed his remarks to his associate.

“Is this cove trying to be funny, or what? I’m not in the funny mood myself.” 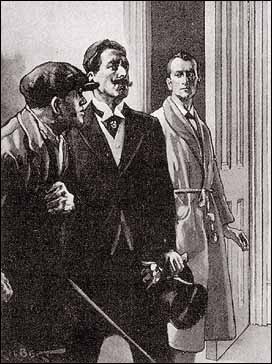 “I’M GOING INTO THAT BEDROOM.”

“No, I expect not,” said Holmes. “I think I can promise you that you will feel even less humorous as the evening advances. Now, look here, Count Sylvius. I’m a busy man and I can’t waste time. I’m going into that bedroom. Pray make yourselves quite at home in my absence. You can explain to your friend how the matter lies without the restraint of my presence. I shall try over the Hoffman ‘Barcarole’ upon my violin. In five minutes I shall return for your final answer. You quite grasp the alternative, do you not? Shall we take you, or shall we have the stone?”

Holmes withdrew, picking up his violin from the corner as he passed. A few moments later the long-drawn, wailing notes of that most haunting of tunes came faintly through the closed door of the bedroom.

“What is it, then?” asked Merton anxiously as his companion turned to him. “Does he know about the stone?”

“He knows a damned sight too much about it. I’m not sure that he doesn’t know all about it.”

“Ikey Sanders has split on us.”

“That won’t help us much. We’ve got to make up our minds what to do.”

“Half a mo’,” said the boxer, looking suspiciously at the bedroom door. “He’s a leary cove that wants watching. I suppose he’s not listening?”

“How can he be listening with that music going?”

“That’s right. Maybe somebody’s behind a curtain. Too many curtains in this room.” As he looked round he suddenly saw for the first time the effigy in the window, and stood staring and pointing, too amazed for words.

“A fake, is it? Well, strike me! Madame Tussaud ain’t in it. It’s the living spit of him, gown and all. But them curtains Count!”